Mimosa Pudica is a flowering, creeping perennial that is native to South and Central America. It's nicknamed "Sensitive Plant," "Touch-Me-Not" and "Bashful Plant" because of its unique reaction to being handled or disturbed. When touched, the plant's leaves fold up and recoil almost immediately and then re-open a few minutes later.

T he plant itself has been used in Ayurvedic medicine for centuries to treat skin disorders, jaundice, cough, and indigestion, and it has also been used as an antidepressant and antivenom agent. But more recently, it has been discovered that the plant's seeds are a powerful antiparasitic, antimicrobial and intestinal cleanser. When taken in capsule form with water, the seeds expand in the gut and form an elastic, sticky paste that adheres to invaders of the intestines. Once parasites and antimicrobials are stuck to this gelatinous mass, they are dragged out of a person's system in the next bowel movement. Because the digestive tract does not break down mucilaginous herbs like Mimosa Pudica seeds, the gel the seeds create can pass through the entire intestinal tract intact, dragging things that don't belong with it. 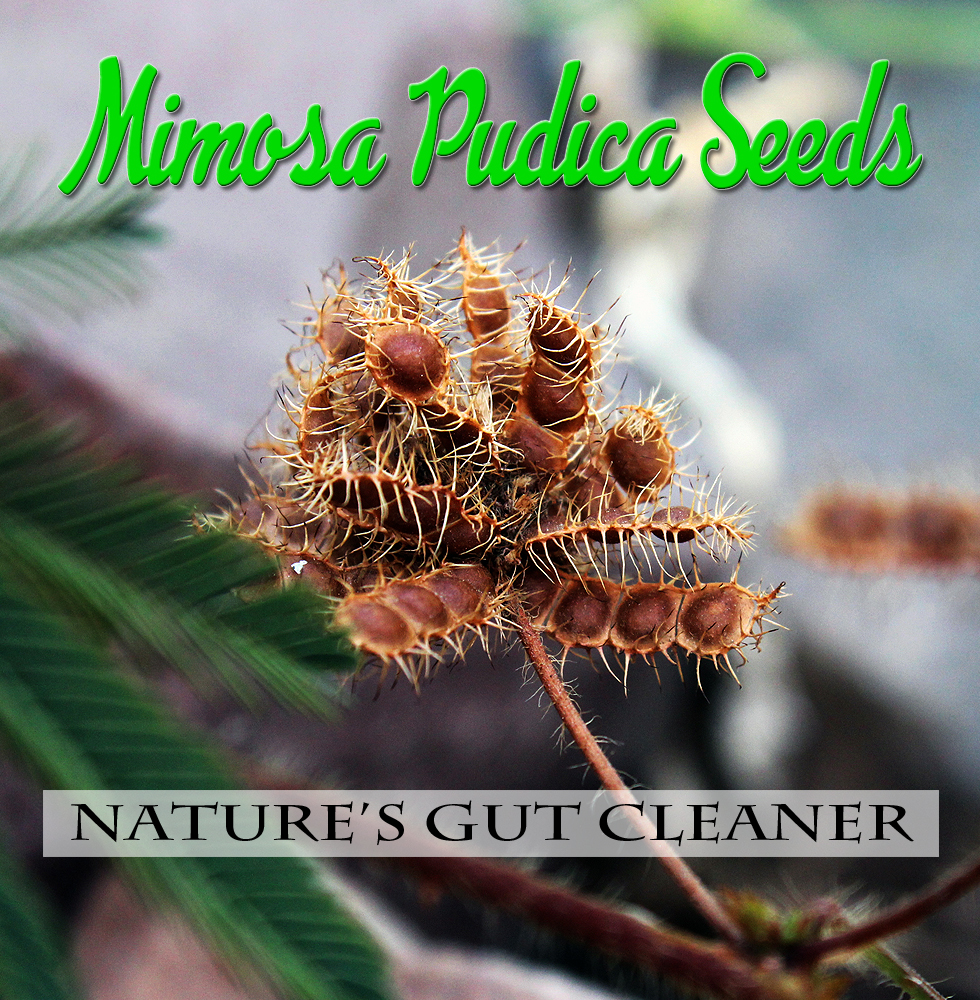 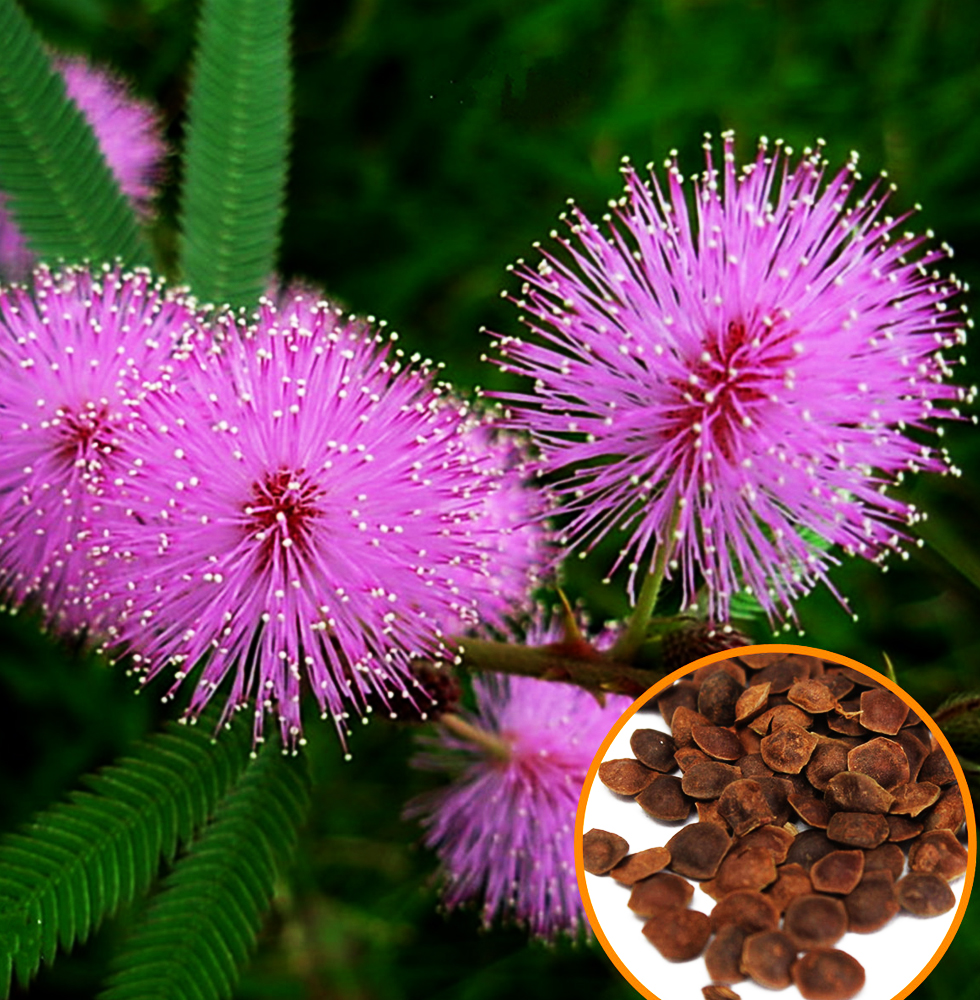 As many doctors will tell you, the basis of your immune system lies in your gut. After taking long-term antibiotics or other pharmaceuticals (especially steroids), Lyme patients can develop severe cases of digestive imbalance, yeast or Candida Albicans overgrowth, ulcers and Leaky Gut Syndrome. All of the above is a perfect environment for parasites, which concerns most people reading this because, according to the New York Times, at least 50% of the population of the Western World has some form of intestinal parasite.

Well-known Lyme doctors like Dr. Lee Cowden and Dr. Jay Davidson point out that internal parasites can hinder your Lyme treatment and should be addressed before trying to continue. One of the reasons they recommend this is Lyme bacteria (spirochetes) can bore into the bodies of intestinal parasites to protect themselves from antibiotics and herbal antimicrobials.

The good news is that Mimosa Pudica seeds can drag all of these pathogens out of a person's digestive tract without the damaging side effects of pharmaceutical antiparasitics and antibiotics. With repeated and steady use (2-4 capsules taken two times per day), the seeds also have the following benefits:

Antiparasitic: As mentioned above, because of the sticky gel the Mimosa Pudica seeds generate, parasites become engulfed, paralyzed and eventually dragged out of the intestines in their entirety. This is a great attribute of the herb because many prescription antiparasitics damage only parts of the bodies of parasites while leaving the heads and other body parts intact. Sometimes worms can regenerate and recover from this damage. Consistent use of Mimosa Pudica seeds is a more broad, natural and devastating approach for disrupting intestinal parasites.

Anti-ulcer and gut-healing properties: Because the seed gel can adhere to ulcer-causing bacteria like H. Pylori, it can remove the cause of the ulcer while also helping to heal the wounds themselves. Those who frequently take pain medications and NSAIDS (non-steroidal anti-inflammatory drugs) can be prone to ulcers in the intestinal tract and Mimosa Pudica seeds can help remove the acid these drugs cause and restore the mucosal integrity of the intestinal walls.

Immune Support: As mentioned earlier, the bulk of a person's immune system lies in the gut, so the fact that Mimosa Pudica seeds remove the agents that compromise the intestines (i.e. parasites, pathogens and ulcers), is the first step to better immune system response. The second step involves Mimosa Pudica seeds' ability to raise antioxidant levels in the body when poisonous toxins are present. This means that the presence of the seeds is a powerful immune system booster, while also being an amazing gut cleanser.

Antidiarrheal: Patients with gut imbalances frequently have chronic diarrhea. If it persists, it can be dehydrating and eventually dangerous. Worse still, many patients take over-the-counter remedies like Imodium A-D that slow intestinal movement, creating constipation and thereby slowing the removal of the body's toxins. On top of this, Imodium A-D can actually become addictive with frequent use. Mimosa Pudica seeds on the other hand, contain high amounts of tannins, flavonoids and polyphenols that are natural antidiarrheals that have no adverse side effects. In a 2011 study, Mimosa Pudica was shown to be effective against diarrheal disease (see study).

Antimicrobial: In a 2015 study, Mimosa Pudica was found to have "significant activity" against the bacteria E.coli, S.aureus, B.subtilis and S.typhi. The combination of the plant's high flavonoid levels in combination with the stickiness of the seed gel make it a formidable disruptor of microbial activity in the intestinal tract.