When seeking treatment for Lyme disease, most chronic Lyme patients understand the need to take a number of supportive substances to help them repair damage from the bacteria, stave off further infection and to improve cellular function and protection. The bacteria attacks healthy cells and weakens one's bodily defenses, and without some kind of supportive measures imbalances can occur.

W e polled a number of chronic Lyme patients across the country and asked them to reveal the contents of their personal medicine cabinets.

Please note this is not meant to be a comprehensive list. This is a compilation of supplements our polled patients thought were important for others to know. Here is what we found: 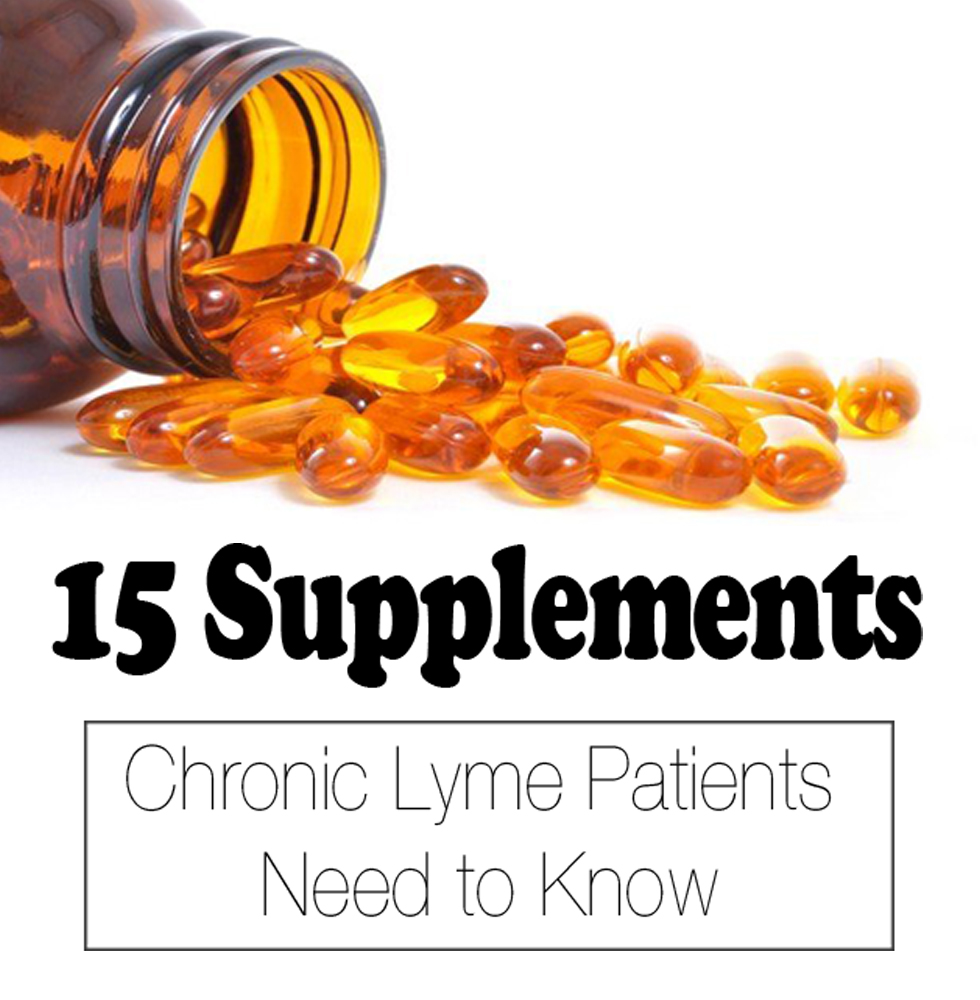 1. Vitamin D3: There are two different forms of vitamin D: vitamins D-2 and D-3. Vitamin D-2, or ergocalciferol, is the form made by mushrooms from exposure to sunlight. Vitamin D-3, or cholecalciferol, is the type that’s made in your skin. Vitamin D3 works to naturally boost an individual's immunity and works to regulate inflammation. Taking about 5,000 IUs daily, especially if vitamin D deficient (which most Americans are) is highly beneficial. However, taking extremely high doses (40,000 IUs per day) can cause adverse side effects, so patients should pay attention to their daily dosage levels.

2. CoQ10: CoQ10 (Ubiquinol ) has the ability to protect both your brain and nervous system from inflammation and degradation, while also working to lower symptoms such as joint pain and bodily aches. CoQ10, is used many times for patients with chronic fatigue and autoimmune disorder symptoms. Doctors commonly recommend taking about 200 mg of CoQ10 twice a day.

3. Medicinal Mushrooms: Medicinal mushrooms such as cordyceps, reishi, and maitake work to promote an adaptive immune system. By doing so, autoimmune reactions are lessened and more controlled. Medical mushrooms can be found in supplement form and have been shown to reduce stress and reactions to inflammation. They also boost an intracellular antioxidant called superoxide dismutase that protects your cells. Medical mushrooms can also work to increase the function of natural killer cells within the body that work to kill off bad bacteria. A popular medicinal mushroom used by Lyme patients is known as Lion’s Mane, which is used for improving cognitive function, digestive function, and reducing inflammation. It also works to build back the myelin sheath in the nervous system as well as regenerating nerves that have been damaged by Lyme bacteria. Click here to read our article about "5 Medicinal Mushrooms Every Lyme Patient Should Know."

4. B-Complex: B vitamins are known to support metabolic and cellular functions. They also work to improve neurological health and fight bodily infections. Vitamin-B6 is especially important for patients battling Lyme disease, since it works to fight the effects of stress and fatigue.

6. Magnesium Malate: Magnesium malate is a combination of the mineral magnesium and malic acid. Malic acid is a naturally-occurring substance that helps in the production of energy during both aerobic and anaerobic activities, and magnesium is an electrolyte that has multiple roles within one's body. It supports nerve signaling and reduces muscle aches and is important for helping to maintain normal cardiovascular, muscle, nerve, bone and cellular function. A majority of Americans are magnesium deficient, however those who are suffering from Lyme can not afford to become magnesium deficient since stress and illness only increase the body’s need for more.

7. Mimosa Pudica (seeds): Mimosa Pudica is a famous ornamental plant commonly known as sleeping grass, sensitive plant, humble plant, shy plant, and touch‐me‐not, among other names given to it because of its leaf movement when touched. Its roots and leaves have been used in Africa and India to disable the venom of snake and scorpion bites as well as to treat wounds and venereal diseases, but it is the seeds that have a special use for Lyme patients. Mimosa Pudica seeds can paralyze and cause all manner of intestinal parasites to release from a person's intestinal walls. Because of this, it is well known as a parasite fighter and it is also effective at treating urinary tract infections as a natural alternative to antibiotics. It is also an anti-inflammatory, antidiarrheal and an antimicrobial. (see study).

8. Turmeric: Turmeric has been known as a natural anti-inflammatory for centuries and works to reduce joint pain, headaches, and damage to both blood vessels and nerves. Tumeric's active ingredient is curcumin, which is one of the three curcuminoids present within turmeric. When consuming curcumin alone the body has a hard time absorbing and metabolizing the curcuminoids, only metabolizing about 10% of any portion of curcumin at a time. However it is possible to increase the bioavailability of turmeric by adding adjuvants, which will help your body better metabolize the substance. By adding black pepper or coconut oil to your turmeric, one can increase the bioavailability of the supplement by 2,000%. Black pepper works to slow your liver from filtering out the curcumin, and coconut oil, which is known as a fat, works to facilitate curcumin absorption into one's bloodstream via your lymphatic system.

9. Black Currant Oil: This oil is a natural source of gamma-linolenic acid which is a strong anti-inflammatory agent. The oil helps to support the adrenal glands in Lyme patients who are suffering from adrenal fatigue. The oil also works to stimulate the production of the adrenal cortex hormones.

10. Liposomal Glutathione: The health benefits of this supplement are almost truly endless. Glutathione is known for its anti-inflammatory properties, and helps the immune system function more effectively, especially within cell-mediated immunity processes. Infection, exercise, and toxins all deplete glutathione and can trigger mitochondrial dysfunction. This is why many individuals battling chronic Lyme may develop severe fatigue. Since many affected by Lyme have suppressed immune systems, supplements such as this one are very important in the protection of your body's cells. However, glutathione is not easily metabolized because it is destroyed in the gut. That is why it is important to use liposomal glutathione, which is made up of phospholipid layers that protects it from breakdown in the digestive tract, allowing it to be fully absorbed.

11. Apple Cider Vinegar: This is a natural antibiotic and antiseptic, capable of fighting both viruses and bacteria. The properties that make up ACV have been proven effective for treating issues within the circulatory and digestive systems, such as acid reflux, arthritis, and high blood pressure. Those within the Lyme community are in favor of daily use of ACV in regulated doses as a tonic to promote improved energy levels and function. Another benefit of ACV is helping to balance the body’s pH levels. Acidosis is a common symptom of Lyme disease, and apple cider vinegar has been known to have alkalizing effects, thus treating acidosis and helping your body’s pH stay at a neutral state. When using ACV always make sure that it is unfiltered , unpasteurized and contains the “mother." The “mother” helps to provide immune boosting properties on its own, and allows the vinegar to get stronger over time and maintain its beneficial properties.

12. Monolaurin: Monolaurin is found in coconut oil and may be similar to other monoglycerides found in human breast milk. This powerful substance kills bacteria, including borrelia burgdorferi or the Lyme bacteria. Once absorbed into the cell membrane, monolaurin interrupts the bacteria’s reproductive signals so that it does not have the ability to continue to multiply. Monolaurin also weakens the membranes, and over time when enough Monolaurin is absorbed, the membranes of the burgdorferi bacteria rupture and die. Monolaurin does all this wonderful stuff against invasive bacteria, all without harming our bodies beneficial bacteria in the slightest bit. It is commonly used by Lyme patients to fight candida overgrowth in the gut, and it has been shown to have some antiviral properties as well.

13. Colostrum: Over time, antibiotic treatment for Lyme disease can cause severe issues to both an individual's immune system and digestive tract. Colostrum offers amazing immune and digestive health benefits. It is a milky fluid that comes from the breasts of humans, cows, and other mammals the first few days after giving birth and it contains immunoglobulins, lactoferrin, lactoperoxidase, proline-rich polypeptides (PRPs) and other immune components that assist the body in fighting infection. Lactoferrin is known to be an excellent destroyer of Lyme bacteria, while PRPs help to destroy pathogens within the immune system and help battle inflammation. Because colostrum contains very little lactose, even those who are lactose intolerant are usually able to take this supplement with no issue.

14. Activated Charcoal: Detoxing is extremely important when battling Lyme disease and obtaining relief from a Herxheimer reaction. Although killing off the Lyme bacteria is extremely important, that's only half the job. Individuals must help the body remove the endotoxins that spirochetes release in the body once they are killed. Activated charcoal comes in many different forms and works by adhering to the endotoxins that are responsible for a Herxheimer reaction. The supplement works by deactivating harmful substances within the body by creating a film over the toxic substance, making it biologically inactive. It does this because charcoal has properties allowing it to remove up to 100 times the charcoal’s weight in toxins which it then carries out of the body safely via the digestive system. One teaspoonful of it has a surface area of more than 10,000 square feet which allows it to adsorb large amounts of chemicals, toxins or poisons. But because activated charcoal is such a strong binder, it is recommended you take it at least an hour away from food and other supplements because it can actually absorb them and render them ineffective.

15. Chlorella: This supplement contains a higher content of chlorophyll than any other food source. Chlorophyll is a substance that occurs naturally in plants that gives them their green color and facilitates photosynthesis. Chlorella has an amazing ability to detoxify the blood, bowels, and liver which is why it is considered to be a first-class detoxifying agent for Lyme patients. The breakdown of both RNA and DNA within the cells is thought to be a major component in degenerative diseases like Lyme disease. Chlorella's abundant RNA content as well as its ability to detoxify the blood and liver, heal and rebuild tissues, increase the growth of beneficial bacteria in the bowels, positively aid the immune system, and work to rebuild nerve tissue damage throughout the body make it an excellent supplement for treating neurological Lyme disease.

Many of the above supplements have been combined together in an affordable supplement powder especially designed for Lyme patients. Click here to find out more.